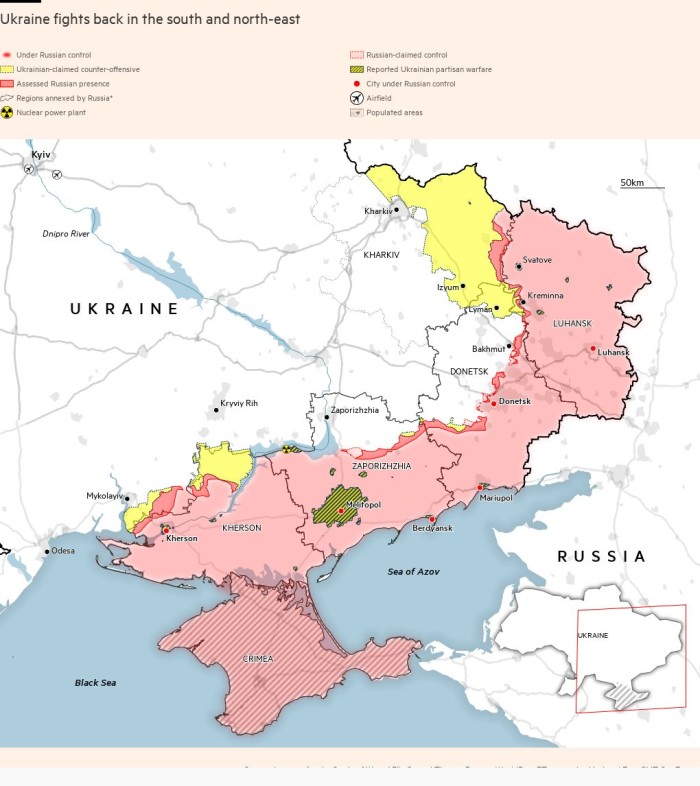 • This page is regularly updated with the latest available maps

• Read more on the War in Ukraine

At the end of August, Ukraine launched its first big counter-attack since Russia’s full assault on the country began in February, even as Kyiv complained that its forces lacked sufficient heavy western weaponry to make a decisive strike.

The advance liberated 3,000 sq km of territory in just six days — Ukraine’s biggest victory since it pushed Russian troops back from the capital in March.

Ukraine’s forces have continued to push east, capturing the crucial transport hub of Lyman, near the north-eastern edge of the Donetsk province, which it wrestled from Russian control on Saturday October 1. The hard-fought victory came after nearly three weeks of battle and set the stage for a Ukrainian advance towards Svatove, a logistics centre for Russia after its troops lost the Kharkiv region in the lightning Ukrainian counter-offensive.

One of President Volodymyr Zelenskyy’s other stated aims is to recover Kherson, a regional capital with a strategic position on the Dnipro river that Moscow’s forces captured in March after they swept north from Russian-held Crimea.

Ukrainian forces broke through the front lines in Kherson overnight on Monday October 3, one of the four regions President Vladimir Putin annexed the previous week, in the latest blow to Russia’s military campaign. Russian forces retreated about 30km in the southern Kherson region from Zolota Balka to Dudchany in a day.

Other key maps and charts from the war

The shift in the conflict’s focus towards the Donbas region follows Russia’s failure to capture Kyiv during the first phase of the war. Before Ukraine’s rapid counter-offensive, marginal Russian gains in the east suggested the war was entering a period of stalemate.

The Russians were thwarted in Kyiv by a combination of factors, including geography, the attackers’ blundering and modern arms — as well as Ukraine’s ingenuity with smartphones and pieces of foam mat.

The number of Ukrainians fleeing the conflict makes it one of the largest refugee crises in modern history.

In mid-March, an attack on a Ukrainian military base, which had been used by US troops to train Ukrainian soldiers, added to Russia’s increasingly direct threats that Nato’s continued support of Ukraine risked making it an enemy combatant in the war. On March 24, Nato agreed to establish four new multinational battle groups in Bulgaria, Hungary, Romania and Slovakia to add to troops in Estonia, Latvia, Lithuania and Poland.