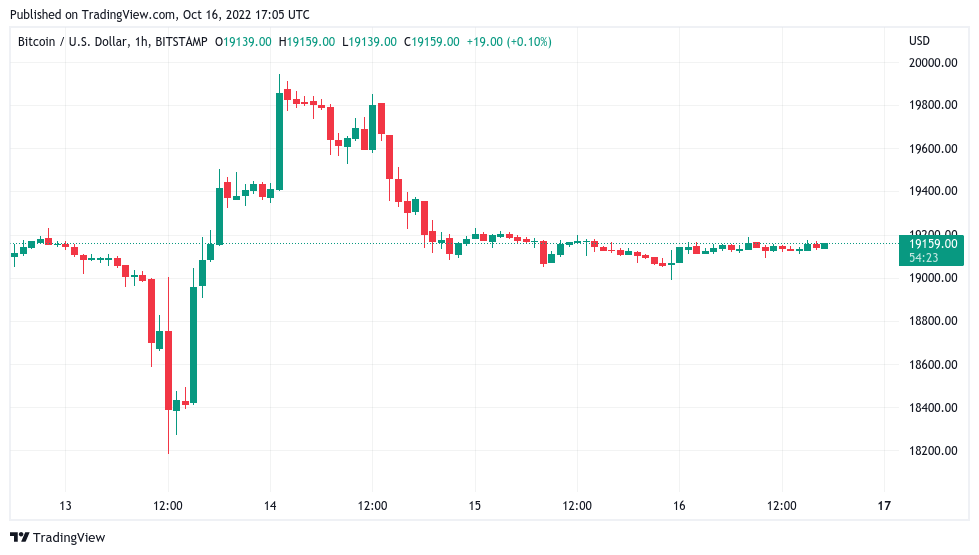 Bitcoin (BTC) stayed rigidly tied to $19,000 into the Oct. 16 weekly close as analysts warned that volatility was long overdue.

Data from Cointelegraph Markets Pro and TradingView captured a lackluster weekend for BTC/USD as the pair barely moved in out-of-hours trading.

After United States economic data sparked a series of characteristic fakeout events over the week, Bitcoin returned to its original position, and at the time of writing showed no signs of leaving its established range.

For Michaël van de Poppe, founder and CEO of trading platform Eight, it was a question of not if, but when unpredictability would return to crypto.

“Matter of time until massive volatility is going to kick back into the markets, after four months of consolidation,” he told Twitter followers on the day, adding:

“Majority is still assuming we’ll continue to go downhill with the markets, but I think that odds of upwards momentum have increased.”

The week’s macro figures managed to spark a run to one-week highs for BTC/USD, with another popular commentator, the pseudonymous il Capo of Crypto, maintained that a bear market relief rally could see $21,000 return before downside continued.

In a Twitter update prior to the weekly close, they revealed a belief that the “entire market” was about to gain.

“Capitulation will happen, but not yet,” they added in part of a subsequent discussion on the market outlook.

With that, Bitcoin was in line to finish the second week of “Uptober” down 1.5% versus the start of the month — its worst performance since 2018 and far short of its 40% 2021 gains.

Looking ahead, market participants eyed ongoing correlation to stock markets as proof that the short-term prospects for Bitcoin were less than rosy.

With the Nasdaq Composite Index seeing its first weekly close below the 200-period moving average in fourteen years, comparisons to the dotcom crash and 2008 Global Financial Crisis abounded on social media.

“This was a pivotal moment for the two prior 50-80% bear markets in 2000 and 2008,” Nicolas Merten, founder of YouTube channel DataDash, commented in a post on the topic, adding:

“#bitcoin has never lived through something like this, so expect much more pain to come.”

As Cointelegraph reported, not everyone was bearish beyond the short term, with LookIntoBitcoin creator, Philip Swift, calling time on the 2022 bear market by the end of the year.