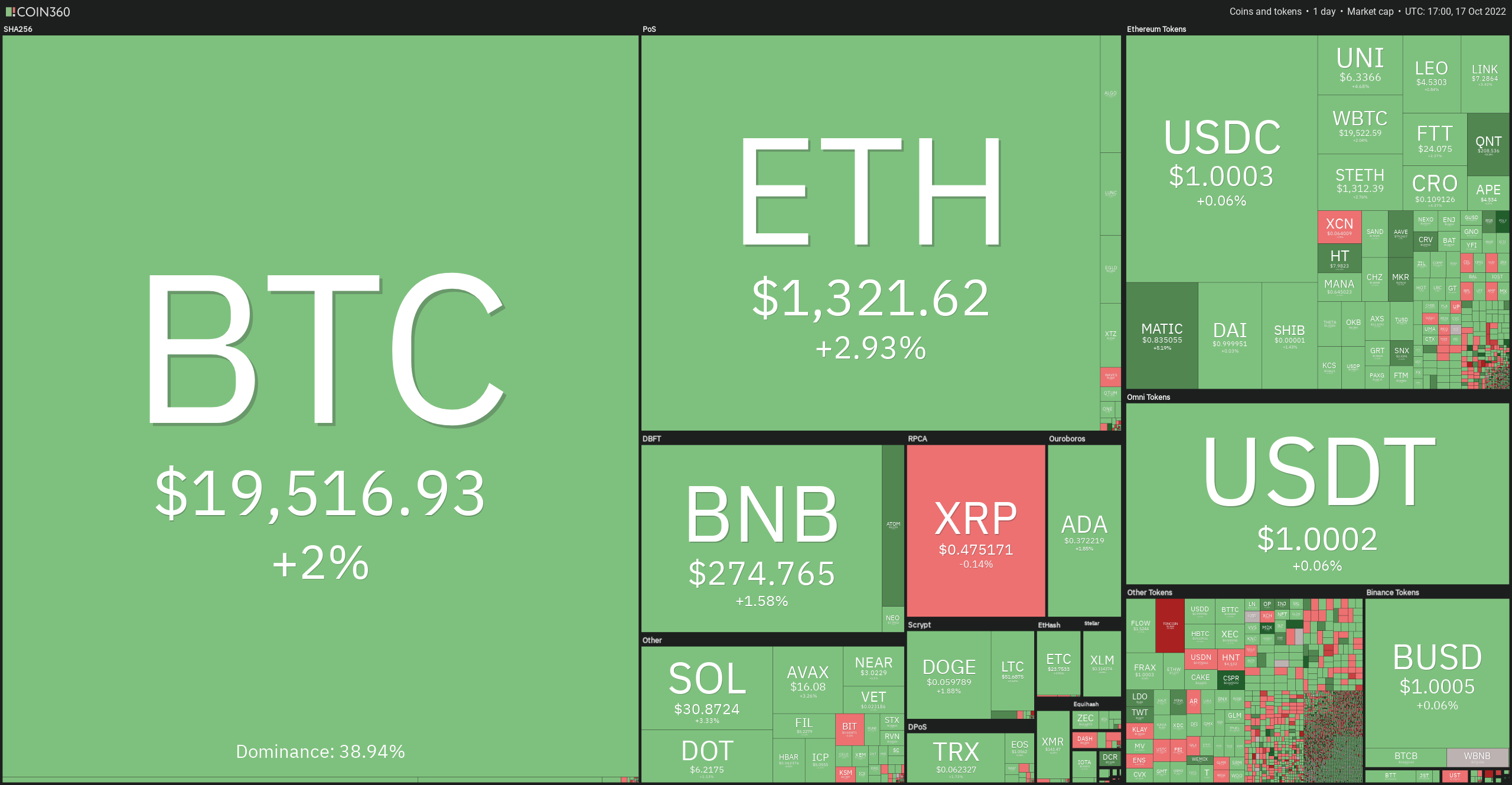 The scenario changed drastically on Oct. 17. After earnings, the season ramped up and a sharp policy reversal from U.K. Finance Minister Jeremy Hunt added detail to the government’s plan to fix his predecessor’s (Kwasi Kwarteng’s) fiscal package, which had triggered a record fall in the value of the GBP and a near liquidation of pension plans in the United Kingdom.

Quant (QNT) broke above the overhead resistance at $162 and has continued higher, indicating sustained demand from the bulls.

The upsloping 20-day EMA ($149) indicates advantage to buyers but the RSI in the overbought territory points to a possible minor correction or consolidation in the near term. Buyers are expected to defend the drop to the breakout level of $162.

If the price rebounds off this level, the QNT/USDT pair could rise to $200 and later attempt a rally to the target objective at $230.

This positive view could invalidate in the near term if the price turns down and breaks below the 20-day EMA. The pair could then decline to the 50-day SMA ($120).

The pair is facing resistance near $188 but the rising moving averages and the RSI in the overbought zone indicate the path of least resistance is to the upside. If buyers thrust the price above $188, the pair could rally to $204.

Contrarily, if the price turns down and breaks below the 20-EMA, it will suggest that traders may be booking profits. That could pull the price down to the crucial support of $162. A break and close below this support could indicate that the pair may have topped out in the near term.

OKB (OKB) has been trading above the moving averages for the past few days and the RSI has jumped into the positive territory, indicating advantage to buyers.

The first support on the downside is $16.39. If the price turns down and breaks below this level, the pair could slide to the moving averages and then to $15.

The price turned down from the overhead resistance at $17.50 but the bulls are trying to defend the 20-EMA. If the price rises above $17, the likelihood of a retest of $17.50 increases. Buyers will have to clear this hurdle to signal the resumption of the uptrend.

The positive momentum may weaken if the price turns down and breaks below the 20-EMA. The pair could then decline to the 50-SMA. If this level also cracks, the next stop could be $15.50.

On the contrary, if the price rebounds off the 50-SMA and rises above the 20-EMA, it will suggest accumulation at lower levels. The bulls may then again attempt a rally to $17.50.