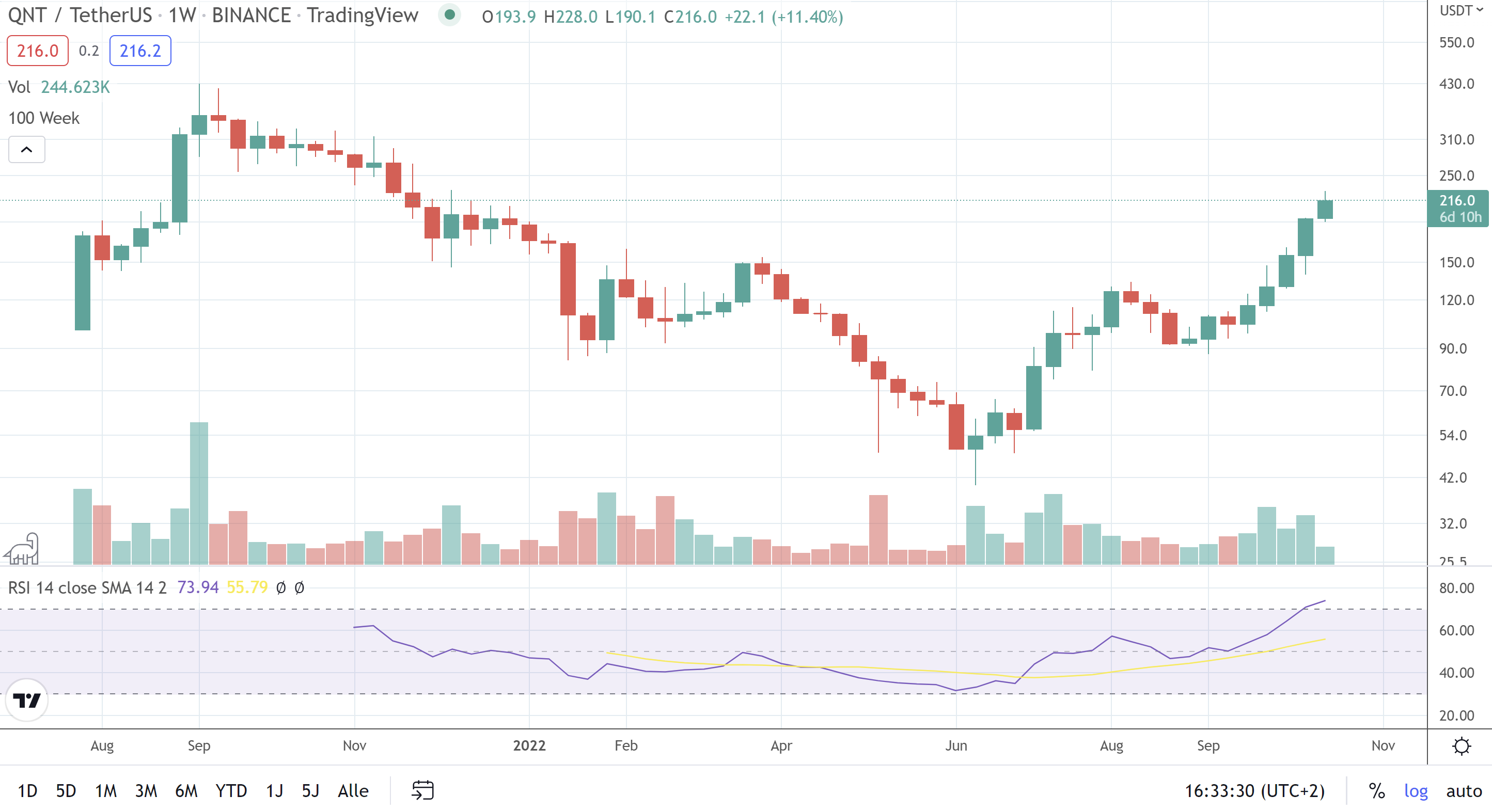 While the broader crypto market continues to linger in bear territory, one cryptocurrency continues its steep climb undeterred and now occupies rank #27 in the top cryptocurrencies by market capitalization.

Quant (QNT) was trading at half its price exactly one month ago. Today, QNT broke through the $200 mark for the first time since November last year and is currently writing its fifth weekly green candle, according to TradingView. At the time of writing, Quant is trading at $216.

Apparently, the QNT is currently carried by an extremely large hype, which is reflected in the Relative Strength Index (RSI), which is close to a value of 75. An RSI of over 70 indicates an overheated market, as the price has risen too high too quickly. Thus, according to trading theory, a cool-down in the form of a retest of the last high at $133 for QNT could be possible.

Reasons For The Skyrocketing Price Of Quant

One of the drivers for the hype seems to be the news of the last weeks. In particular, the global trend and call for Central Bank Digital Currencies (CBDCs) has garnered Quant extremely positive headlines.

Speculation that the Quant Network, with its interoperability feature, would play a central role in the development of central bank digital currencies may have contributed to the rally in recent weeks, and triggered FOMO among some traders.

Moreover, Quant Network has recently made headlines for its work with the Bank of England on the digital pound, and just last weekend, executives attended SWIFT’s Sibos conference, which focused on digital payments.

In addition to Verdian, Quant also employs another very renowned personality. Guy Dietrich, former Managing Director at Rockefeller Capital, has already joined the Quant Network as a board member in 2019.

Dietrich was a managing director at Rockefeller Capital Management in New York until January 2021. He has more than 35 years of investment experience. Before joining Rockefeller, he led Morgan Stanley Smith Barney’s largest private wealth management practice in Silicon Valley.

On the flip side of the coin, according to Santiment, QNT’s rally is being accompanied by an outsized accumulation of coins by whale addresses holding QNT 100 and QNT 1,000. Whales have piled up QNT from 1.47 million to nearly 1.7 million in the past four months.