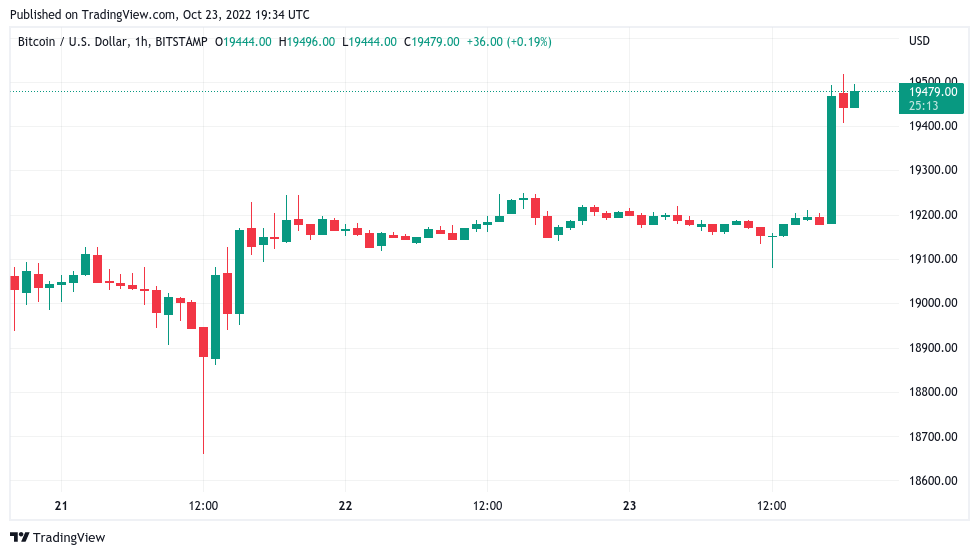 Bitcoin (BTC) saw fresh gains on Oct. 23 as the weekend delivered a potential launchpad for the bulls.

Data from Cointelegraph Markets Pro and TradingView followed BTC/USD as it spiked above $19,500 as the weekly close approached.

Now, hopes were high that the market would offer more solid price action in the coming days, $20,000 remaining out of reach for over a week.

An accompanying chart showed resistance in play around $19,500.

“Still moving higher from the green box. For now rejected exactly at that horizontal,” he added.

Analytics account On-Chain College meanwhile noted that even such an hourly uptick had managed to spark comparatively large number of liquidations, these setting a multi-day record.

“Around $6 million in Bitcoin Short Liquidations over the last hour. This is the highest short liquidation level in 10 days,” it confirmed alongside data from on-chain analytics platform CryptoQuant.

In terms of weekly closes, Oct. 23 looked set to be another close-run candle within an increasingly compressed cluster.

Related: Bitcoin will shoot over $100K in 2023 before ‘largest bear market’ — trader

Should BTC/USD end the week above $19,440, however, it would nonetheless represent the highest weekly close since early September.

In an update, trading suite Decentrader nonetheless described Bitcoin as “strong” going into the close, with multiple trading indicators bullish.

“I do believe the bottom is in for Bitcoin, despite the majority believing that we’ll hit $14K or lower,” Michaël van de Poppe, founder and CEO of trading firm Eight, meanwhile added in thoughts on the day.