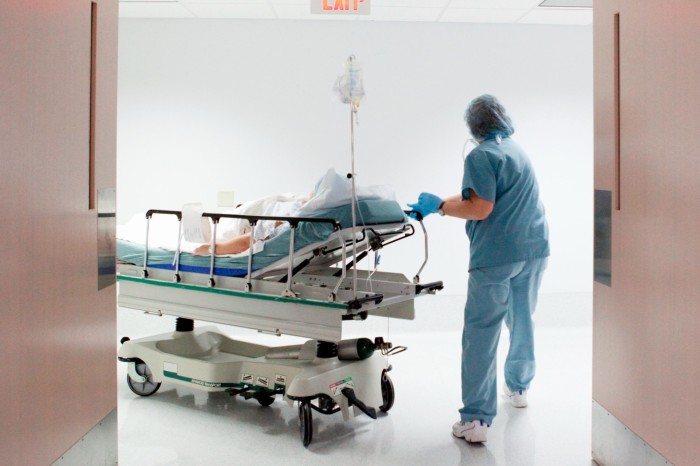 The US hospital staffing company Envision Healthcare, owned by the private equity firm KKR, has the lowest possible junk-grade credit rating and is at risk of bankruptcy, according to Moody’s.

But an ownership stake in Envision, bundled with stakes in hundreds of other private equity-owned companies, has been transformed into a financial security marketed to ordinary savers as a safe investment with a stellar credit rating.

The product is known as a “collateralised fund obligation” and its aim is to diversify risk by parceling up the companies providing returns. CFOs are, in some ways, a private equity variant of “collateralised debt obligations”, the bundles of mortgage-backed securities that only reached the public consciousness when they wreaked havoc during the 2008 financial crisis.

So far, CFOs have flown largely under the radar. Although some of private equity’s largest names such as Blackstone, KKR, Ares and the specialist firm Coller Capital have set up versions, this is often done privately with little or no public disclosure of the vehicle’s contents — or even, in some cases, of its existence, making it all but impossible to build a full picture of who is exposed and on what scale.

CFOs introduce a new layer of leverage into a private capital industry already built on debt. Their rise is one illustration of how post-crisis regulation, rather than ending the use of esoteric structures and risky leverage, has shifted it into a quieter, more lightly regulated corner of the financial world.

And even as a leveraged buyouts boom falters and regulators turn their attention to the risks involved in so-called “shadow banking”, there are signs their use is increasing.

“We represent 50 of the world’s largest asset managers and lots of large private equity shops, and this is the hottest inbound call we get,” said John Timperio, a partner at the law firm Dechert who advises on CFOs.

In marketing materials, Dechert describes CFOs as “the technicolour dreamcoat of fund finance.”

The vehicle exposed to Envision is one of several CFOs launched by Azalea, an independently-run unit of the Singapore state-owned investor Temasek. It is more transparent than most because it is offered to retail investors, though Azalea does not tell those investors which portfolio companies they are exposed to, citing “confidentiality obligations”.

In effect, the CFO is a box containing stakes in 38 private equity and growth funds that Azalea committed money to. The funds are managed by many of the industry’s biggest names including Blackstone, KKR, Carlyle and General Atlantic.

When the CFO was issued in May, those funds held stakes in 982 companies, including UK defence group Cobham, the Blackstone-owned casino operator Cirsa, the vet business IVC Evidensia and the debt collector Lowell, which in 2020 needed a £600m cash injection from its owners.

The CFO issues senior and junior bonds, which can be bought by retail investors and which offer fixed interest payments of 4.1 per cent and 6 per cent. When the 38 funds hand cash to their investors, the CFO uses it to make interest payments, then holds some back in a reserve account designed to ultimately pay off the principal.

Any remaining cash, after debt repayments and expenses, goes to the holders of the CFO’s equity, in this case Azalea itself. Owning the equity is “nothing more than a levered investment into private equity”, says Jeff Johnston, chairman of the Fund Finance Association.

S&P Global and Fitch rate the senior bonds in Azalea’s CFO as A+, an investment-grade rating that means it is deemed unlikely to default, and is far higher than the typical junk-grade ratings of individual private equity-owned companies.

It had a “diversified pool of quality private equity funds”, the company added, saying that “a focus on the performance of individual underlying companies can lead one to lose sight of the strength of a portfolio approach”. The KKR fund that owns Envision, one of the funds in the CFO, had made 1.9 times its money as of September, corporate filings show.

Private capital firms’ own CFOs are largely a way to raise money, and they work slightly differently. A firm will bundle together stakes in several of its own funds and turn that into a security, offering bonds and equity to investors. Those bundles sometimes include stakes in credit, real estate and infrastructure funds as well as private equity.

KKR, Coller and Ares did not publicly disclose details of their CFOs, even as Ares issued one worth about a billion dollars last year according to a person with knowledge of the transaction. Coller has issued two — one this year and one in 2020 — and KKR has issued at least two. The firms, which are not required to disclose the transactions, declined to comment.

CFOs typically issue bonds worth about 50 to 75 per cent of the value of the holdings in the underlying funds, according to several people with knowledge of the deals. The Azalea CFO’s leverage is lower, at 39.6 per cent when first issued, according to its prospectus.

The CFO model was first used in the early 2000s. Six private equity versions worth $3.6bn in total were issued between 2003 and 2006 according to the ratings agency Fitch.

Some of those CFOs were downgraded or restructured during the downturn, Fitch said, though they ultimately paid off their rated bonds in full. None were issued in the six years from 2007 when “there was limited market appetite for nontraditional securitisation”.

Private equity started using the structure again during a long era of cheap money. It is just one of the ways in which new layers of leverage have been introduced in that time.

Over the past decade, buyout groups have increasingly levered up not just their portfolio companies but also the funds through which they buy them — often at floating interest rates that are rising fast.

Many use “subscription lines”, in effect a short-term loan against the ability of pension funds and other investors to hand over the money they committed to a buyouts fund. Some use a tool known as “NAV lending”, a loan to the fund that is secured against the value of the equity in the companies it owns.

Here, too, little information is available. Just 8 per cent of the 5,350 funds tracked by Preqin would tell the data provider whether or not they were using subscription lines. The loans can magnify the returns figures that buyout groups disclose to their investors, by making it look like profits were generated in a shorter time period.

Still, it is costing the investors, says James Albertus, assistant professor of finance at Carnegie Mellon University’s Tepper School of Business: “The interest expense is reducing the distributions that go to the ultimate beneficiaries — that’s the teachers relying on public pension funds.”

CFOs can be built on top of that leverage. Some of the funds in the Azalea CFO may already have borrowed against investors’ commitments, the Singaporean group has told investors, warning that lenders to those private equity funds could lay claim to the funds’ assets, which could “adversely impact the cash flows available” to pay bondholders.

CFOs have received good credit ratings partly because they are a diversified bet on the cashflows from private capital funds, an asset class that has boomed, benefiting from a long period of rising valuations and cheap debt.

But the conditions that fuelled private equity’s boom have gone into reverse. Buyout funds have been on a dealmaking spree for several years, buying record numbers of companies at eye-watering valuations, some of which are now facing an uncertain future as an economic downturn kicks in and borrowing costs rise.

Little data is yet available on whether, or how much, payouts from private equity funds to their investors have slowed this year as dealmaking stalls. But returns from the private equity funds raised in the years leading up to the 2008 crisis were the industry’s worst in the past two decades, figures from Preqin show.

Regulators sound a note of caution

So far, CFOs have escaped much regulatory scrutiny, in part because they are private offerings which require little in terms of public filings.

But, at the Practising Law Institute’s Fund Finance conference this month, Larry Hamilton, head of the law firm Mayer Brown’s US insurance regulatory and enforcement group, warned that at least one regulator is starting to pay attention.

The National Association of Insurance Commissioners, a US regulatory group, is working on reform proposals that could reclassify some CFOs from debt to equity investments, since they are ultimately backed by equity stakes in companies. That could ramp up the cost of holding them and apply retrospectively to CFOs already issued.

“It was bothering some people at the NAIC . . . that you could take fund interests, kind of package them, securitise them, issue this collateralised fund obligation, and lo and behold you’ve gone from a 30 per cent-capital-charge private equity investment to something highly favoured with a lower capital charge,” said Hamilton.

A banker who has worked on CFOs said buyout groups are staying quiet about their use, partly because of the NAIC’s attention, which has emerged because insurance companies sometimes invest in the structures.

At least two US state pension plans are separately considering setting up CFOs as a way of freeing up cash, the banker said. But “no one wants to be a first mover”.

As raising funds gets tougher, private equity firms are looking to ever-more-complicated types of CFOs as a possible solution. 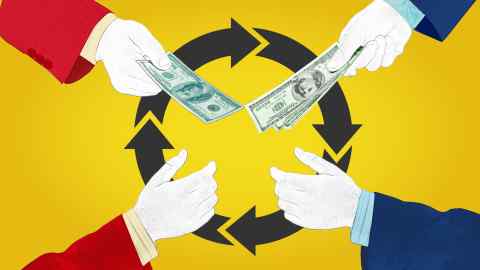 Ahmet Yetis, a managing director at Evercore, told the conference panel about some “cutting edge technology that we’re working on”.

Under the model, an investor in a private equity fund — such as a pension scheme — would sell its fund stake to a new vehicle, a type of CFO called a “collateralised continuation fund obligation”. The CCFO would be managed by the private equity firm that ran the original fund.

The investor would receive some cash and a share of the equity in the CCFO. The CCFO would issue bonds, and commit the proceeds to the private equity firm’s new funds.

On hearing the description of the complex chain of financial transactions that would bring fresh cash into the buyouts industry at a difficult moment, one of Yetis’ fellow panelists remarked: “You’re truly the magician.”